Face off between an NUM picket and police, 1984. Photograph: Don McPhee 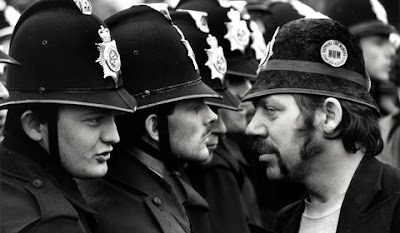 I posted a bit about this photograph yesterday and how it was part of the excellent "Long Exposure" exhibition at The Lowry http://www.thelowry.com/WhatsOn/EventDetail.aspx?EventId=3466 and how For me it is one of the great British newspaper pictures. I thought I would try to explain why I think this.
There has been in bloggy land the question raised "Has traditional photojournalism had it's day?" here for example http://groups.google.com/group/conscientious/browse_thread/thread/a3e7c7860eb28834 This is from Joerg Colberg's Conscientious blog http://www.jmcolberg.com/weblog/ Now I don't know the answer to that question but I do know that I would guess that the above image is a pretty classic example of photojournalism and as far as I'm concerned just as powerful now as it was when it was first shot, you can now add to that, the historic importance that this image has gained over the last quarter century and I'm not so sure we need a "new" language of photojournalism as some are arguing for. Good is just Good, it needs no new fads or gimmicks.
Is there a better image that shows the monumental social shifts that took place during the Thatcher years? If there is I've not seen it. This is a decisive moment photograph in the true sense of the phrase. In that eye contact between the police and the miner you can see the moment that the working men of Britain were betrayed by the establishment of the day. Life for millions of people would never be the same. some would say, myself included, that we are still reeling from it today. To be able to sum up an entire period and such a momentous one at that, with a single image is a triumph not only for Don McPhee but also for photojournalism.
Manchester's Don McPhee 1945-2007
Posted by mark page at 23:01

Email ThisBlogThis!Share to TwitterShare to FacebookShare to Pinterest
Labels: Photographs