'When Anish Kapoor Came Round For his Tea' by Mark Page. 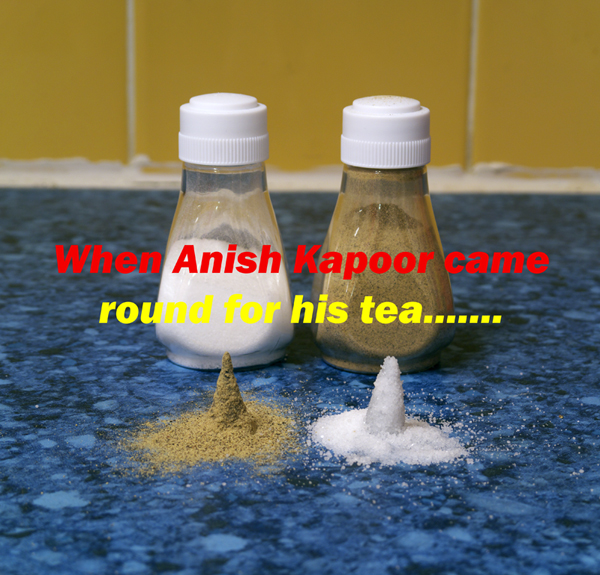 This story starts in the spring of 2013. I was sat eating a Babybel cheese one night and as I was playing with the red wax I thought to myself, "bloody hell Mark, that wax looks like the stuff Anish Kapoor makes his sculptures out of". So that summer I spent much of my time imagining  what other things found in an everyday kitchen could have inspired Anish Kapoor. I liked the idea that a great artist of international standing would come round to your house for tea but just couldn't stop creating Art.
Towards the end of summer I had a set of photographs. Earlier that same summer it had been announced that Anish Kapoor was to get a knighthood. I thought it would be nice of me to make a little book out of the pictures and send them to Anish  as a way of congratulating him. And so a book was made, a jiffy bag bought and off it went to Sir Anish's gallery in London.
I didn't have time to forget all about it, as within the week I got an email back from Anish saying how much he had enjoyed the book and how kind it was of me to invite him to tea. (He also wanted to order more copies of the book which is always nice),
and he was also interested in what else we could do together with the book and I am now in touch with his studio.
And so the story continues..... Fact coming out of fiction. The moral of the story? Always eat cheese before bed.
Posted by mark page at 11:33 6 comments: