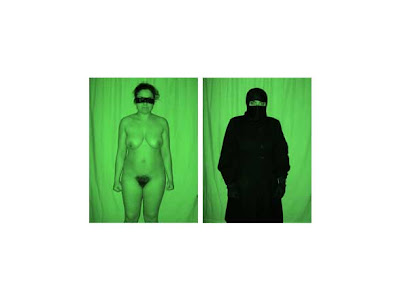 Can't pretend that I'm in anyway familiar with the work of Michael Slusakowicz and can't seem to find out much about him online, but he has a solo show coming up at Manchester's Artland Gallery and I'm intrigued to see work by someone who puts together the two images above. It's either going to be really really interesting or really really dodgy.......

James Walmsley Artland's Director says of the work:
“The intelligence, sexuality, darkness, depth and terror of Michaels work has a gravitas not only to move, challenge, and disturb ….but also to question, explore and understand our capacity for brutality and the darkness that dwells in all of us.
In Michael's work I also see an outrage at an innocence and a love defiled….for if love and trust are abused and lost, then what do we become…..and what do we become capable of?
He is exploring universal themes that reference Milton, where angels become devils and gods become flesh. This resonates in the global politics of the present. Morality is blurred.The aggressor becomes the liberator and acts of opposition become acts of terrorism.That which is beautiful can be forbidden and the depraved and unjust can become heroic. “