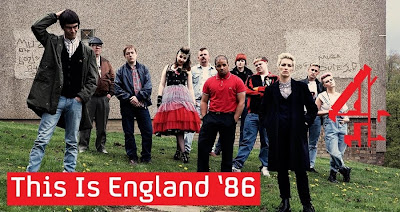 If you missed THIS then you are a bit of a knob.
Posted by mark page at 00:04

Email ThisBlogThis!Share to TwitterShare to FacebookShare to Pinterest
Labels: TV

A bit of a knob it is then - I was strangely unconvinced, unmoved and unsurprised by the film so didn't bother with this. Who cares? Not me!

This I think will prove to be far better than the film. It was funny that I was thinking of your post about Hindi film while I was watching it. He managed to cram in so many emotions already in just an hour.

Maybe I'll give it a go then - it's always good to change one's mind about somthing.

Any song and dance in there?

No dancing but plenty more! I think the problem has been the shitty promo that Channel 4 have used to promote it. It gives the impression it's another SKINS/Hollyoaks.