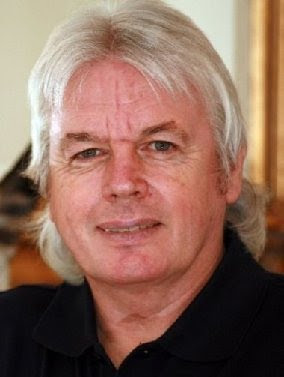 David Icke, mad as fish.
I'm more of a miserable pessimistic old git than a paranoid conspiracy theory kind of a bloke but there's been a couple of things that recently have made me wonder.

We British are shit at sport, or at least at sports that you can't sit down to do, "games" other than rowing or driving or fishing. So don't you think that it's bloody strange that just before we are to host the next Olympics or 'Twenty twelve' as people insist on calling it, we suddenly get really really GOOD. It's either a conspiracy or the drugs tester was off sick that day.

#2 Chats with the Taliban

Now I don't claim to be a four star general although I was a sixer in the cubs so I could have been but. My understanding of warfare is that the idea is to find the enemy and then shoot or blow the fuck out of them, not find them and then make a documentary about them. If SKY NEWS can find them how come the Army can't ? I don't imagine that during the second world war that PATHE news sent a newsreel crew into the bunker to see what Hitler had for his tea.

I packed in the 'skunk' years ago but these two make me wonder.

Mate it's laugh a bloody second in the Page household....

If I don't find a job soon I will be taking in lodgers...