Introduction to Pilgrims by John Fitzgerald. 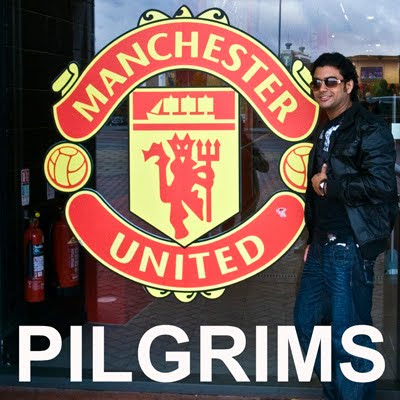 When my Dad first took me to Old Trafford on a Sunday afternoon in the mid-1970s it wasn’t to see a game. We just walked slowly around the ground. He knew what he was doing. These peaceful Sundays gave me, aged six or seven, a wonderful opportunity to get a feeling for the history and tradition that makes Manchester United Football Club what it is.

Much has changed of course, but the sense of heritage around Old Trafford remains every bit as potent. This suite of 52 photographs by Mark Page focuses principally on two statues – the tribute to Sir Matt Busby erected in 1998 and 2008’s United Trinity, a suitably stylish celebration of those United icons - George Best, Denis Law and Sir Bobby Charlton.

But history is just the starting point here. It’s the human factor, the human element, which makes these images so richly evocative, so poignantly suggestive. As in much of Mark’s work, this sequence explores the relationship between the built environment and the men, women, boys and girls who act out their lives within and around it. It is the visitors to Old Trafford featured here, these flesh and blood people, who bring the statues and the ground alive. Without people none of it would mean anything.

And these pictures are about exactly that – people – and about Manchester United and the impact these two words can have in people’s lives. As the Tottenham Hotspur legend, Danny Blanchflower, famously remarked: “Football is about glory, it’s about doing things in style and with a flourish, about going out and beating the other lot, not waiting for them to die of boredom.”
Manchester United, for all its perceived faults, has never lost that. The names of Busby, Best, Charlton and Law are synonymous with this ‘style’ and ‘flourish’ – a way of playing remembered and cherished long after the final score is forgotten.

We need this in our lives. It’s why I became a Red way back when and it’s what I sensed and felt in the fabric of the ground as we walked around. There’s something special about Manchester United and I say that, please God, without any arrogance or superiority. Because it isn’t about trophies or money or how many “fans” you have. It’s about people - about speaking to and connecting with people.

At a deep level. The level of their hopes and dreams.

Look at the visitor in photo 39 jumping for joy in front of the old Scoreboard End. Look at the young lad in photo 6 reaching out shyly, almost reverently, towards the United Trinity. Look too at the variety of facial expressions, tending so often towards the thoughtful and the contemplative. Sometimes the human figures seem dwarfed by statues and stadium, but in every image there is this sense that their visit isn’t just another tourist ‘tick in the box’. This moment of connection with Manchester United is so much bigger and wider than that.

And this is the great intangible that Mark captures so sensitively - that fleeting moment when these many and varied people fulfil their pilgrimage and become part of a family, part of a rich, ongoing heritage and tradition.

So, pop down to Old Trafford if you can and have a good look. But bring this book with you. These 52 images will tell you more about Manchester United and more about the human condition than anything to be found in the club Megastore!
Introdution to PILGRIMS by Manchester based writer and historian John Fitzgerald.
Posted by mark page at 23:26