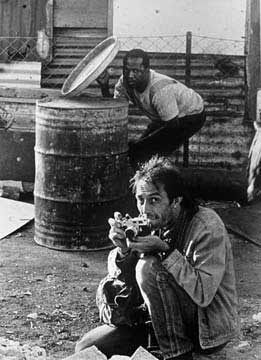 Perhaps that's what it is. Perhaps that's the reason for the mass snapper migration to Haiti. Kevin Carter syndrome. I don't mean the scum who are making profit running shitty journo courses but the reason so many are willing to throw their DSLR's into Billingham bags and hunt out death. The hope that they will make the front cover of TIME followed by champagne parties and NEW YORK shows. You'd think though that THAT would be a cautionary tale....... Anyway that's all I'm saying on the matter. Me posting about Haiti and the curious case of the rent 'O' journo's. It's as ultimately pointless and self serving as the photo packs images.

devils advocate here, hasn't this been the norm since Vietnam?

hasn't our thirst for instant information caused this syndrome?

We could say the same thing for injury lawyers, politicians and americans anytime oil is discovered somewhere. Where there is misery, we humans love to know about it, as it makes us feel a little bit better.

Daniel,
Without doubt it has been the norm since Vietnam although that of course was a war and it could be argued that photojournalism could perhaps change the course. This is an Earthquake and the vast majority of the world is in agreement that it's shit and they need money. Several hundred often badly informed photographers taking the same image over and over again has no point and becomes little more than sport.

To say that where there is misery... you are perhaps right however pandering to it in no way excuses it. As for lawyers I leave that to their profession to police that. I can only try and comment on my own namely photogaphy.

Guy,
I am in agreement with you.We will have nothing but ill informed knee jerk titalation this way.

Cheers to both of you for the comments.

do not have strings attached and this disater isn't turned into another example of economic imperialism. How photographers go about exploring and articulating that is the interesting question.