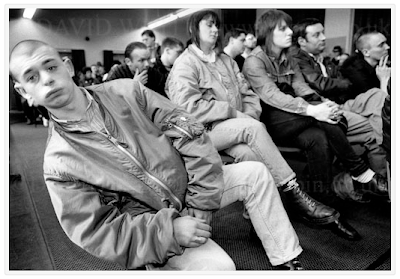 As I've just heard that the BNP have won their first seat in the European Parliament. It follows on from my last couple of posts.

I guess we have to do the best we can to clean up our own bit of the back yard when it comes to racism and other questions of unfairness and shitty behaviour.

So following on, this:

duckrabbit offers $1000 photography prize,
In a vicious attack the blog Reciprocity Failure recently accused America's most prestigious photography magazine PDN of 'passive racism' when it revealed that 24 out of the 24 judges of their Photo Annual competition are white. PDN have so far failed to mount a defense but duckrabbit are determined to come to their rescue.

Rather than see the world of photography dragged through the mud and a cloud hang over PDN duckrabbit have announced that they are offering $1000 to anyone who can credibly defend PDN's all white panel.
But will anyone come to their rescue and claim the prize?
For more details about the award visit the duckrabbit blog.
Benjamin Chesterton
Creative Director, duckrabbit
www.duckrabbit.info
United Kingdom
Landline +44 (0)121 4446716
Skype: duckrabbit76
Bloody well done to duckrabbit for literally "putting their money where their mouth is".
Posted by mark page at 23:43