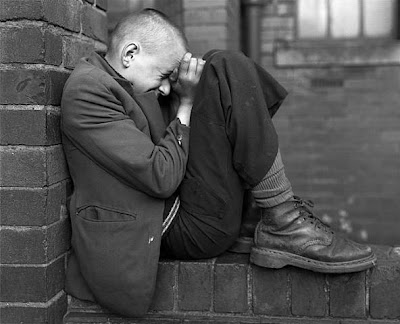 This is an iconic image, a famous image and for me one of, if not the best British portrait ever taken. It's been read as a metaphor for Britain at the end of empire, at the end of it's industrial reign. Britain awaiting the huge political and social change that was to arrive with Thatcher a couple of years later.

I'm sure it's all of those things and more.
I've always related to it on a personnel level. The subject could have been me. The lad would have been about the same age as I was then. I had them boots, that shaved head them pants, "Birmingham bags" we called them, swap the location from Jarrow to another Northern town in terminal decline, in my case Widnes and Mr Killip could have taken my picture.
It's also a picture of vulnerability, perhaps a metaphor for nation, I see it on a more literal level and I don't think that that makes it any less of a work of art.
This image stirs a sense of nostalgia, as I've mentioned, the clothes etc. It also drags back darker memories of a permeable sense of despair, of fear for the future heightened by the onset of manhood.
The current recession and rise of hate party's such as the BNP stir up memories from the same time. Young lads like the one shown above were easy pickings for the jackals of the right. Back then it was the NF and the youth division of Oi! now replaced by the BNP or the more "user friendly" UKIP. They are still looking for recruits and finding them, that picture could be shot again with a kid wearing tracky's we have new economic hardship and a new load of foreigners to blame.
Not that anyone needs to make a new image, Killip's picture stands the test of time but I challange any of you photographers who are reading this to go sum up our current scary moment in our nations history so perfectly with one shot......
Posted by mark page at 10:02

That's one tall order compared to that shot.

let us know if you see one!

I wish I was back home in the UK right now, not that I'm saying I'm as good as Killip mind you, but goddamn it I'd have a go...

Besides, that racist tosser from the BNP even had the audacity to cite my hometown of Bradford to further his cause - he said what was happening there was not immigration but colonisation.. And then he claims to be to be working in the interests of British citizens. Honestly, the fucking nerve.

Can i ask your background?
cos u seem to know nowt about the pic your hosting.
vulnerability??
U fukin weed, u write shit.#
Im going to open a site that points to this and show people what a cock u are.

U talk a load of crap.
A picture of vulnerability???
U know nothing, yr a dick and im going to open a site pointing here, explaining what it was like to grow up in gasteshead in 1979. then people can look at your fuckt up post and see yr just a posh boy that knows nothing.
What is your background????