Ben Graville's "In & Out of The Old Bailey" 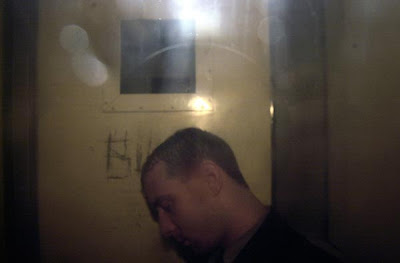 Uhhm Ben Graville's series "In & Out Of The Old Bailey" where to start. I would like to say that out of all the genre's of photography (and yes I know definitions are getting blurry, but humour me) Art & Documentary are what I spend most of my time looking at. I would never claim to be that knowledgeable about photojournalism but in the words of my Mother "I know what I like" so what to make of Graville's series.
I came across it by being on the Foto8 mailing list where this series is currently being showcased. I approached it from an Art point of view, wow I thought what a concept, what a good idea. We've all seen the paps and hard nosed press fella's sticking their big DSLR's up at the Meatwagon windows when some pee-doe or politician is behind the little black portholes, but what about the ordinary convict, breakdown of society, celebrity, surveillance all kind of metaphor and on top of that, fuck yeah lets look at them convicts! I've not seen that done before, think
Elephant Man style Victorian freak show goer and that was me.
On some levels these images are great. The rawness of the aesthetic, the fact that they have left me feeling a little grubby and have got me still thinking about them several days later and I'm sure for longer to come, all goes in their favour and some way to justify their existence. One of the justifications of shock art is to question to create debate and so this work has filled that role.
All that said I am uneasy with this work. I'm not sure about it's morale's. As said I became aware of it through Foto8 so it is fairly safe to assume that it's supposed to be a photojournalist piece not Conceptual Art. Does that matter? I believe it does and here's why.
Art owes nothing to anyone. Sure the artist owes to his/herself to be true, but other than that it's only job is to raise questions. How that is done is between the artist and their conscience. The artist has a supreme right to create work that is answerable to no one. OK a little strong but you get my point. I really don't believe that photojournalism has that right, in short it has more responsibility, and judging this work by what I see as the agreed rules of journalism I can't see the point or worth of these images and if anything find them just wrong.
First off what gives Graville the right to take in the truest sense of the word these peoples pictures. For a start off unless he has some gift of insight that even the judiciary I'm sure would not claim to have, he is assuming that these folks are criminals which of course if innocent till proven guilty means anything we can't know that. The whole series tells me next to nothing about the criminal justice system, crime or indeed nothing about the reasons behind crime or the criminals themselves other than what they look like when kept in less space than a fucking farm animal gets. No this is an idea that a photographer has had that has no other purpose than to raise his profile and fuck the people portrayed. He says this in his statement: "
The long process and dark grim historical nature of criminal law was the starting point of these pictures, highlighting through the anonymity of the remand prisoners hidden away from public consumption, not through choice but a decision made by the authority to potentially alienate further from society these remand prisoners. Through the project I realized when taking the pictures that the remand prisoners reaction by the third photograph with the flashgun firing was true to how they wanted to be portrayed in their current situation. Covering themselves up, making rude gestures, exposing parts of their body, expressing gang signs, pulling strange faces or joking with the camera. Devoid of the public gaze you often hear remand prisoners banging on the window of the van to attract attention, a reaction I received as well photographing. This want to be heard or seen is present in the photos showing how the process of criminal law mystifies and intensifies the situation as the prisoner travels between the remand prison and the Old Bailey."
Maybe it's me but I don't get any of that from these pictures I get people trapped and having their humiliation amplified by someone taking their pictures. OK so perhaps some respond with bravado so what? Tell me I'm wrong I would love to hear points of view from people with more experience of photojournalism and responsibility like say Duckrabbit.
Why do I have such an issue with this work, it smacks of that shit categorising people that the Nazi's did. I'm not saying that Graville's a Nazi but he obviously thinks he's Superior to this lot.
Posted by mark page at 01:09

I too wondered about this - I've seen the photographers shoving their cameras against those blacked out windows and always thought it was a bit disrespectful - I actually think it's scenes like that that give us photojournalists a bad name, making us all seem like intruding vultures to the general public. It's not for nothing that when I tell people I'm a photographer, specifically a photojournalist that they sometimes respond, vaguely disgusted with "What, like a paparazzi?".

I think you rightly compare these photos to a freak show and I think if Graville really wanted to give these people who 'want to be heard' a voice he would have made an effort to get inside the van with them and then take their picture.

I wonder what their reactions would be to that.

When ever I see photographers desperately sticking their lenses in car windows and tripping over each other (especially outside the Old Bailey) I just want to give them a good slap. This to me is no different . Its desperate and pointless and judging by the photographers other work a vain attempt to get noticed through 'shock tactics'. The guys hardly Tom Stoddart is he...
Excellent post by the way, hope all is well.
Marcus.

Glad I'm not the only one to think this. To be honest I'm really suprised (and a little disappointed at Foto8 for showcasing it. Yeah Marcus I'm good been using 120 film again! I'll post something here soon.

Granted, Graville spouts some nonsense about the remand prisoners joyously responding by the third flash as if they finally understood their role, but I take him up on the point that the fact he is in a position to takes these pictures is interesting.

Ideally, we'd not live in a paparazzi world, but we do. Do authorities then - over time - phase in windowless vans or do they not assess windows in their remand transportation fleet?

Seems to me like they haven't removed or modified windows because there is no incentive ... or they don't give a shit. It's never been important.

But, still, up turns Graville who takes the lazyish move to publish his photographs as a series on Foto8 and we're all up in arms like we're not aware of Latin Americans in bloody bits; Asians in natural disaster or Africans in civil war torment.

Why does Graville get special treatment? Photographic exploitation is going on daily across the globe. I suppose this is an instance the photo community can directly affect though .. fair point.

Why be disgusted when for a small moment a camera captures the bare truth of one human inside a box because another human put them there?

Prisons are really bad places. The vans are in the same category.

Graville's work would really impress me if he were to donate any earnings to prison reform, victims rights and at-risk education projects ...

p.s. check out NYTimes blog discussion about suffering in art and see if you think there are any parallels of argument.

Mark ... what a debate you've sparked, like to see these comments on your blog so that everyone can read them proper ... will link here.

I think I agree with everyone. Photographers look like twats when they do this. The fact that we presume guilt says something about 'us', our conditioning and not necessarily the photographer. Having been wrongly banged up myself, and then released, the series says something to me about just how vulnerable you feel in these situations ... to be hounded like this must add to the bewilderment.

The situation is easily solved. Just black out the windows.

The real problem with this series is that it only tells half a story. FOTO8 uses audio as an afterthought, but someone who had been through this situation, talking about the experience,would have given an entirely different perspective on what we are looking at. This would have illuminated the pictures and built sympathy with the people.

I have to say though Mark, I hadn't given this much thought, which is why I appreciate the way this blog engages no holds barred with the world more than any other in the UK, including duckrabbit (or anyone writing in the papers)