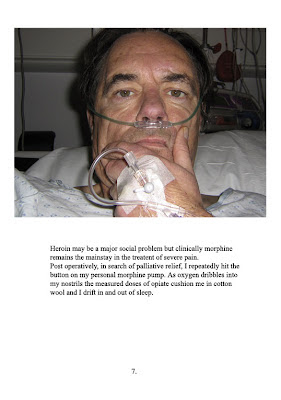 Peter Hagerty is a Liverpool photographer who also happens to be one of my old tutors from the Documentary Photography course at Stockport. He also happens to be a photographer whose work I really admire. He was also the first creative director at Liverpool's Open Eye Gallery. Take a look at his 1982 project "Thirty Six Views of Mount James" and then remind yourself that it was done in 1982, yes 1982, (Martin Parr was still pissing about with mono in 1982!) then ask yourself why he is not better known? The picture above is from his 2008 series "Knee Story" which as I'm waiting for a similar operation (only eight months on the waiting list and still counting!) holds a certain resonance for me. Peter's work: http://www.arklo.com/
Posted by mark page at 20:26