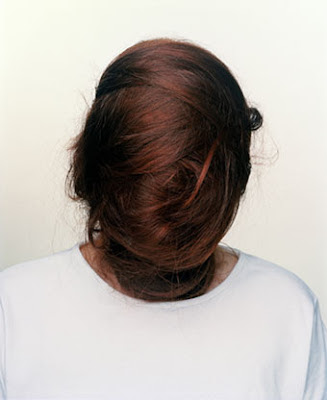 Image copyright John Stezaker
Below text sent from Openeye Gallery
Out of Body
25 January 08 - 22 March 2008
Open Eye Gallery is proud to present the most substantial UK exhibition of John Stezaker's work in many years.
Using manual cut-and-paste techniques, Stezaker breathes new life into photographs salvaged from forgotten film archives and old magazines, transforming them into otherworldly, uncanny objects. His subtle, unsettling interventions allude to the subconscious and the surreal, and explore our seemingly endless fascination with the human face. Stezaker ruptures the naturalistic surface of his images, constructing views which are fragmented and dislocated. His pictures fuse and separate before our eyes, creating surreal new creatures and worlds.
Stezaker has played a central role in a number of developments in contemporary art practice over the last three decades, from Conceptual Art and New Image Art in the 1970s, through to the recent resurgence of interest in collage. Stezaker first showed his work as part of the British Conceptual Art group in 'The New Art', 1972 (the first Hayward Annual exhibition). His interest in the conceptual later gave way to a long-term fascination with images themselves, and it is this interest which he has subsequently pursued through much of his work with found photographs and printed matter.
John Stezaker lives and works in London.
A Stills Gallery touring exhibition, presented in partnership with the Approach Gallery, London.