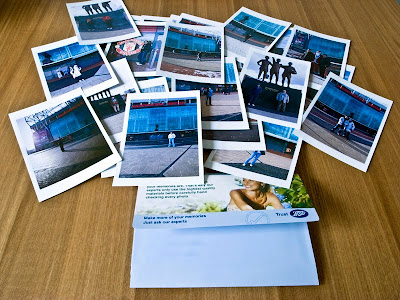 My latest series 'Pilgrims' is now uploaded to my website HERE. There's no text on the site yet as I'm hoping to get someone to write a bit of a forward. So in the meantime here's a bit of blurb about it all.
I had wanted to make work about Old Trafford/United/fans for yonks. I'd had a dabble back in the late 90s when still at college. After starting to visit I soon realised that it was the fans that interested me. As they arrived similar rituals started to become apparent. They nearly all had their photographs taken by friends and family at one of three or four spots. Fans from all over the world had come in part to have their picture taken at OLD TRAFFORD. This was often the first thing that they did, even before visiting the souvenir shop.
I loved the poses of the people, private poses in a public space. If I had of approached and gained permission they would not have been so relaxed or so down right daft! I allowed the family photographers to decided the distance from subject and the position of the subject, I tried to get in close and take a similar shot. I love the fact that I now have similar or the same photographs as people from all corners of the world. I had them printed at a high street shop. I've had 6 packs of these photo's printed.
Posted by mark page at 21:40

Second off... Great idea about "Pilgrims", i did a year at Sheffield United (not by any way near to Manchester United) focussing on the fans, match days, behind the scenes, functions etc. Not seen the light of day yet, going to hold back for a while whilst I'm working on my new projects.

Finally, are you selling any of the packs ? If so, what would be the cost ?

Look forward to reading and seeing more of your work and thoughts... I've also added a Manchester Photography link onto my blog, hopefully you'll have a few more visitors.

Cheers Mate that's all very kind of you to say! The packs are strictly limited to an edition of 6 (2 for me 4 for sale) they are numbered and dated and signed. They contain 52 prints. Price as this is first one sold is £25 + p&p so say £28 all in.

If you are interested you can email me at info@manchsterphotography.com