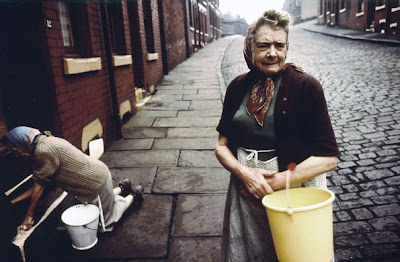 I only became aware of John Bulmer's work a while back when he had a relatively small show at Manchester's Royal Exchange Theatre. A contemporary of Don McCullin he seemed to have slipped off the radar for a while at least as a stills photographer, concentrating more on documentary films. With colour documentary work as good as this and while Martin Parr was only just in long trousers, his photography work should be better known.
Well HERE'S a start. More of his work HERE.
Posted by mark page at 00:11

Thanks Mark, I'd never seen John Bulmer's work before. Wonderful.

Looking at his website, his colour work is fascinating, love the shot of Haile Selassie and the Queen laughing in her carriage. The black and white is amazing too, I love the Black Country photographs.

Cheers Matey. I get all sentimental when I see those old Manchester pics. It looks like a different planet.

Exactly like my village now, 2010, except tarmac's replaced the cobbles.

Most of Salford that looked like that has well gone, still some small pockets.