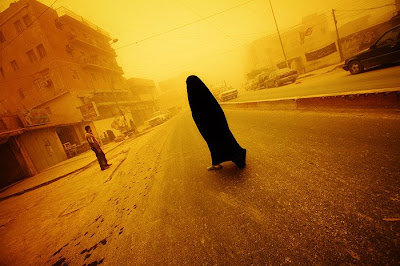 Manchester has a new gallery. Well I say new, new to me anyway. It actually opened in October 08 but has only just made it onto my radar, well I never claimed to be a news hound. OK so this is good, especially as they are showing photography and that's much needed as we seem to be one of the only cities in the western hemisphere without a dedicated photography gallery. I mean a gallery that shows real photography not a load of secondhand Athena style posters shot by some has been model, you know the place I mean. (RG)

It's a brave show this, controversial (see last post) It may ruffle a few feathers, but that's no bad thing, so hats off to this Small independent space. This show their second, features work by New York based photojournalist Chistoph Bangert http://www.christophbangert.com/ and regardless of your views on the relevance of the mediums ability to show us anything new in modern conflict and the morals behind it, this guy can take a powerful picture.

He is also due to do a talk at The Midland Hotel on 29th January 7pm so you will have a chance to grill him over his motivations as only a Manc audience can and should. Tickets need to be booked in advance at £3 (going to relevant charities) from the gallery http://www.artlandgallery.co.uk/

An interesting exhibition and an interesting and as you say, much needed space. Christoph gave a workshop in town on saturday and very interesting it was too - i have written a little about it here