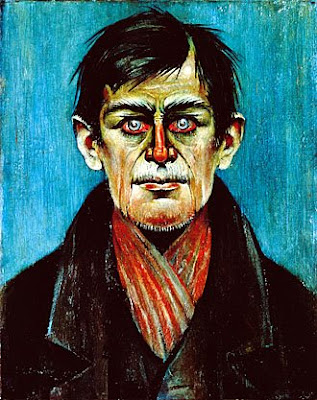 It's one of my favourite painting's by Lowry. You can keep your Mona Lisa, if you want enigmatic, you'd be hard pressed to find a better portrait. And talk about intense, this picture is straight from the bowls of Lowry's darkside. Darkside the affable Mr Lowry?http://www.thelowry.com/lslowry/lslowryslife.html Yeah them matchstick men and matchstick cats and dogs were the public face.

`I can't do a cat yet. The only way I can do a cat is by doing a very bad dog and then in a way decapitating it and it becomes a cat' - L.S. Lowry.

"Man With Red Eyes" is often thought to be a self portrait although Lowry himself described it as an imaginary portrait. It was painted around the time of his all controlling mothers death, there is some confusion as to whether it was painted before or after. Lowry also described it as a "Way of letting off steam"

Why am I telling you all this? Well having recently been to The Lowry centre to see Jem Southem's brilliant new work there http://www.thelowry.com/WhatsOn/EventDetail.aspx?EventId=3465 it's re-ignited an almost life long fascination I've had with both Lowry the man, and Lowry the painting's. Which goes to show you what a great job Mr Southem has done.

P.S.
I will no doubt be posting about Lowry again February time when the professional art critic and fulltime "dick" Brian Sewell has finished his reputation assignation attempt on old L.S.
although Lowry's got Howard Jacobson fighting his corner so he's in good hands! http://www.thelowry.com/WhatsOn/EventDetail.aspx?EventId=3703

Lovely though it is, to think this is all that Lowry is about is to miss so much.

Email ThisBlogThis!Share to TwitterShare to FacebookShare to Pinterest
Labels: Lowry

Brian Sewell is not a full time 'dick' rather a double time 'dick'. I have rarely encountered such a biased and self-opinionated person.

I know I hate self-opinionated people!