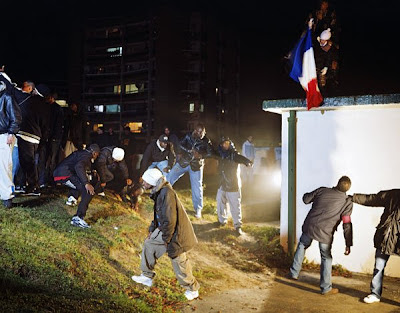 Image copyright Mohamed Bourouissa
Mohamed Bourouissa is a rising French photography star. I first became aware of his work a couple of Portfolio Magazines ago, but it was a post over on Mrs Deane http://www.beikey.net/mrs-deane/ that's jogged my memory.
On first glance his images could be mistaken for reportage, however on closure inspection it becomes clear that his work owes more to the Jeff Wall/Gregory Crewdson school of photography than Magnum. Any one of this years graduate shows would have had at least one purveyor of this type of staged documentary, it is flavour of the month at the moment, Mohamed Bourouissa's work is however head & shoulders above most of it. I don't want to bore you with "know your subject" again but Bourouissa knows the notorious Paris, Le Banlieues http://en.wikipedia.org/wiki/Banlieue and the tensions that are played out on it's streets. Work from the series "Peripherique" can be seen at Sheffield's Site Gallery until the 9th August http://www.sitegallery.org/whats_on/ Online his works harder to find as he has no homepage, (a sure sign he's doing well!) but here's his Gallery representation for more images. http://www.fillesducalvaire.com/
Posted by mark page at 23:13