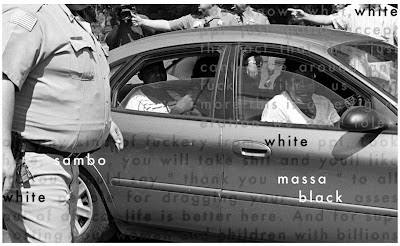 from "The Jena Project" by Michael David Murphy
In a world that is so satuated by images, photojournalism must, along with all visual mediums attempt to remain fresh. Not an easy task. Michael David Murphy's http://www.michaeldavidmurphy.com/galleries/
"The Jena Project" website is one such way to explore, using new ways issues relating to a story. As explained on the site:

"The Jena Project is a remixed, visual analysis of online speech, as seen through a year's worth of comment threads and discussions of photographs and video made by Michael David Murphy during last summer's trials, protests, and marches for the Jena Six in Jena, Louisiana". http://www.thejenaproject.com/

This makes for some uncomfortable stuff, and shows in a very raw way the problems of race relations in modern America. By using new media in this way it manages to shine fresh light on an old yet still unsolved problem.
Michael is also author of the excellent blog 2point8 www.2point8.whileseated.org
Posted by mark page at 22:53