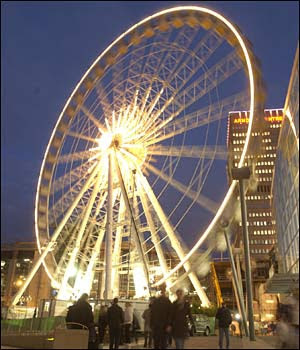 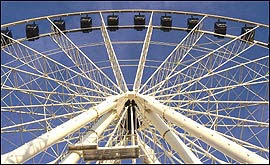 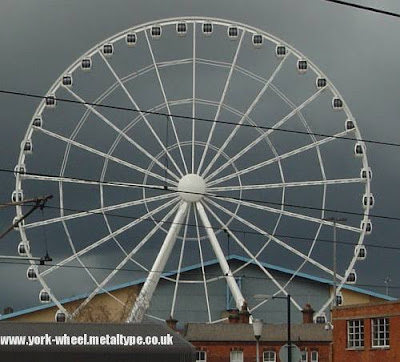 Play "match the wheel to the city"

I have sometimes pondered, if, in some living room in Spain, or perhaps Japan, there is a tourist who has recently returned from a trip to The British Isles, who on the floor in front of him are his holiday pictures. He is scratching his head and wondering which wheel belongs to which city. Next to those photographs are a set of snaps of "pointy white cool looking" bridges again he is not sure where he took those pics.
And the point is? Well none really, I just find it odd that as a nation we have become obsessed with Ferris wheels. I blame the Londoners, and hate the fact that we just copied them. There was a time when this city would have stuck two fingers up at them and done something original. Still it's not just us, Birmingham and York have also gone down the "big fucking wheel to pull in punters" route. The funny thing is it probably works. Type in Manchester wheel on Google images and there are 160,000 pictures. Birmingham beats us with 173,000, and wait for it, There are 1,700,000 images of their wheel! If you love Big, Big wheels then take a look here:http://inventors.about.com/library/inventors/blrollercoaster.htm

Who's "obsessesed" with them? We've just got a few barely worth commenting on, and the only people that do might bo those who say "we're all obsessed"!

They're an obvious landmark to photograph, that's all, no big deal.

And they weren't "copied from London" - the London Eye is actually quite spectacular unlike the little ferris wheel in Manchester - they were copied from Paris.

I think you are! seeing as in 120 posts i've only had 2 comments and one from you! Was it your idea! are you part of Marketing Manchester, were you all brain storming one Friday afternoon, WHEEEEL shouts out anon,