Actually it's nothing fishy other than this fish picture I just liked that as a post title. This is just back to that old chestnut about "copying" that the world of photography just can't seem to get it's tiny ultra conservative  head around. Great chunks of the photography world are the modern day equivalent of the Paris Salon before Pissarro and his crew went and did their own thing.
It ties in with the Mishka Henner saga from a couple of posts ago....Kinda. Take a look at EXHIBIT A, the fish on the left It was taken by THIS fella. As you can read he is not a happy tuna. He has accused fish fancier B of stealing his idea, of putting a fishes head on a plate and photographing it. Imagine that for an idea! For a second he must have felt like Picasso did while taking a shit the morning he came up with Cubism. (I made that bit up). All the crap being talked about copying and appropriation on social websites by photographers who claim to be artists.
If a painter painted a fish on a plate and then another came along and had a pop at it it would be called a "discussion". That's the problem with being a photographer in the 21st century..... It's bloody easy anyone can do it. For less than a grand (as long as you get copies of snide software!) you can get kit that would have saved old Ansel Adams years of his life twating about with his zone system. Paul graham sums it up a treat HERE.
And so it comes down to this, ideas not plate camera's good ideas. You either have an original one or you don't. Most of us wont but we can have a good old play with the ones that are already out there and maybe just maybe we might come at something from a different angle and say something new. Now I'm off to photograph a sunset and nobody better copy me or I'll sue. 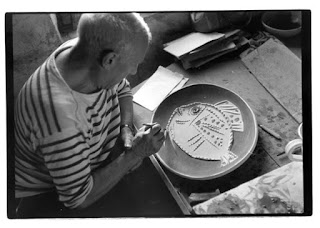 That morning Picasso was doing another fish painting... "There's got to be more to this Art lark than bloody fish. I'm off to the bog to have a good think".
Posted by mark page at 11:43