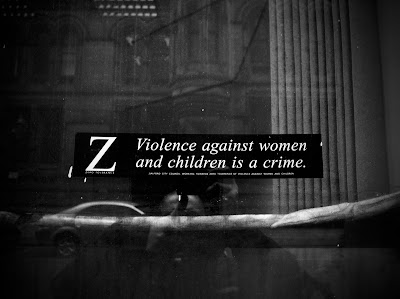 A ZERO TOLERANCE Sticker on a window at Manchester Town hall. The same Town hall where Sir Richard Leese was reinstated last week as leader of the City Council.....
Posted by mark page at 23:43

Email ThisBlogThis!Share to TwitterShare to FacebookShare to Pinterest
Labels: Wankers

Tim Loughton: Let me finish and I certainly will.

In support of its claim, the NSPCC cites the fact that 29 children were killed over the past 10 years during contact visits to non-resident parents. That is an appalling figure. However, it ignores its own research, which shows that over the same period some 800 children have died at the hands of resident parents or carers, and the 2000 publication "Child Maltreatment in the UK", which showed that violent treatment was more likely to be meted out by female carers than male ones.

'Violence against Women and children is a crime' is simply a factual statement. I'm in no way a commie but I still don't think you should hit women & kids.

Shouldn't hit anyone - there is no need to separate it into just women and children.
Violence against Men, Women and Children is unacceptable.