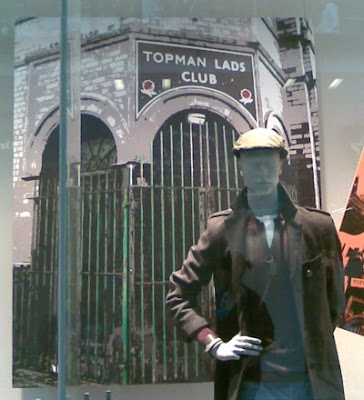 the children's clothes shop have recently made bigger arses of themselves than the gelled up skinny jeaned lady boys who shop there. They have decided that this years trend is called "The Salford Lads club" look! You couldn't make this shit up. Anyway they have photo's of The Smiths Door and changed the sign to read Topman Lads Club. Being self important fashion types they never thought to seek permission and then got some photographer (and I use the word loosely) to shoot some gimps dressed like a cross between the big dancer with the moustache from Frankie Goes To Hollywood 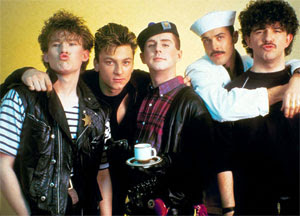 and George Formby.
Apparently it's inspired by the 80's Northern Towns and working men's clubs where Young lads would go to listen to The Smiths.
All photo's shot in London and converted to B/W to give them that authentic gritty Northern feel........... twats.
Posted by mark page at 23:23

Email ThisBlogThis!Share to TwitterShare to FacebookShare to Pinterest
Labels: blags