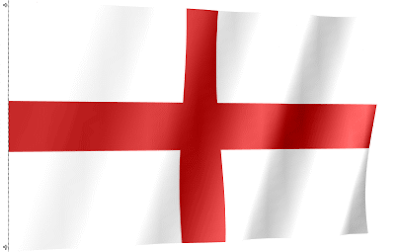 I've been interested in the resurgence of the flag of St George for a while now and have been making work about it for the last year or so. It's profile has defiantly been on the rise over the last couple of years. I have my fears as to the reasons for this. I hope perhaps that it's due to devolution, but I fear it's not.
When I was young you never really saw it about, only on the breast plates of knights of old, oh and Nazi skinheads. It was always the "Jack" that got waved by normal people. Take a look at this footage of England's most famous win.


I only saw one St George flag, everyone's waving The Union jack. Where I live it would not be exaggerating to say that most streets have at least one St George's flag hanging from a window or on a flag pole.
I have a while longer to go on till the project is complete but from what I've learnt so far, it seems to have taken on a similar role to the confederate flag in the USA. Is it becoming the flag of people who rightly or wrongly feel disenfranchised?
Posted by mark page at 23:30

Email ThisBlogThis!Share to TwitterShare to FacebookShare to Pinterest
Labels: Work in progress.

You make a good point about the Confederate flag Mark. The difference in 1966 is that we English just assumed the Scots, Welsh and Irish were part of England and would vheer our win as heartily as we did. Even the official mascot - World Cup Willy - wore a UInion Jack waistcoat. I'm in my 50s and as a kid, like you, I associated the St George cross with knights and the like. It was only in the 70s (as far as I can remember) that the cross become so publicly associated with Right Wing twats.

So my point is, are we trying to reclaim something that was never the cultural artifact that some would have us believe it was?

Steve,
I personally feel that yes we are trying to reclaim something that never was. Thing that I worry about is why?