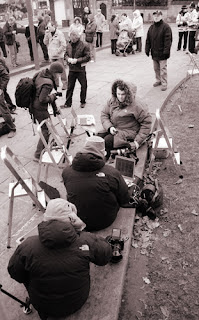 I tried to stay off the subject of Diana, but like the tabloids I thought I would exploit the ten year anniversary. One of the legacy's of her death I believe, is the public perception of photographers. I have often pondered when this change took place, and I believe that one of those shifts came in the tunnel in Paris. If anyone reading this has ever tried taking photographs of people in the street or in fact any kind of "street photography" then you will know just how suspicious people are of photographers and their motives.

I don't think it has always been like this, even in my ten years or so of taking pictures I have felt this change. But there was a time when it wasn't like this. Think back to the sixties, in this country people thought photographers were cool, David Bailey was like a rock star. For me the hay day of street photography was America in the 70's I wonder if Gary Winogrand, the godfather of street photography met with such resistance? The way that those photographers were blamed for Diana's death, (and believe me, I think that "paps" are at the bottom of the photographic gene pool) has helped to add to the public conscience, a pretty negative view of photographers in general.