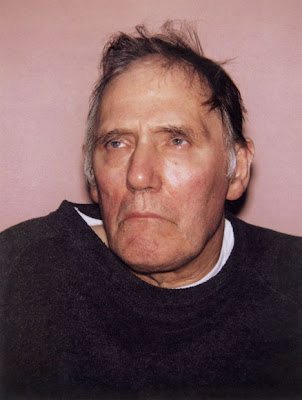 FRESH FACED & WILDEYED is THE PHOTOGRAPHY GALLERY'S exhibition of selected recent UK graduates. I had a little mince through this years crop and thought that David's work FEAST OF LOSSES was memorable. David introduces the project with a poem,

Pain has an element of blank;
It cannot recollect
When it began, or if there were
A day when it was not.

It has no future but itself,
Its infinite realms contain
Its past, enlightened to perceive
New periods of pain.

And then he writes more about it below:

"Feast of Losses is an ongoing series that documents the life of David Pembroke, who in 2003 was diagnosed with Progressive Supranuclear Palsy (PSP), a rare brain disease that causes nerve endings at the base of the brain to die. There is no effective treatment or cure and like other neurodegenerative diseases, PSP gets worse over time.
These portraits offer us a psychologically direct approach through the use of different coloured backgrounds, chosen by David Pembroke on a daily basis to help express his emotions after he lost the ability to use his facial muscles due to PSP. The effect is an increased intimacy to the subject matter and continuous interaction of metaphor by focusing on David’s emotional and physical changes over time. As a result the concerns voiced in these images are strongly biographical, wavering continually between intimacy and distance, tension and objectivity."