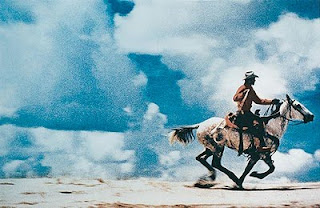 I read with interest your recent POST on Plagiarism and what a fantastic thing it is, the post and plagiarism. I too love a bit of copying as much as the next man.

There's a couple of points I'm not to sure about though.

Can I take it that you think we've all made enough pictures? Is that in general or in specific genres or motifs? That's where my cliches section came from but even photographers embracing the love of plagiarism will no doubt end up falling fowl. I've also been a long time slagger off of much modern conflict photojournalism as pointless same old same old but surely you can't have too many images in general can you? I think it was Joerg Colberg who said that "that's like saying there are too many books; Or something along those lines. Exploring and appropriation is great let's do it, collage for the 21st century but let's also look at different ways of actually making new and original images and ways of using those as well. I for one am getting sick of that fucking cowboy just as much as I'm getting sick of 'girl in tree' pictures.

Although it's always good to look for new ways of doing things lets not 'throw the baby out with the bath water'.

The second type is up there in the top right, your good old Richard Prince, Jeffery Koons styley this is always acceptable it's Artistic Mums apple pie, Have fun go play I've even got a bit in mind myself for a wet weather project.

Of course we are prone to repeat and too much work is made for other photographers (bloggers) to coo over, I know that in portraiture I must, where possible, now use large format with my subject square on, full body and not smiling if I ever hope to be taken seriously and this is the problem not the amount of images out there it's that art photography has become the Paris Salon.

Colour correction what the fuck does that mean? How can it be the wrong colour. Full graduations of grey, no burnt out whites, rules of thirds blah blah blah. And books on how to edit? Bollocks that's what it is. Let's not stop making new images or recording the world lets just chill out and have some fun lets all find our own voices. It can be done. The camera is no more limiting than oil and canvas, and it took throwing the rule book out of the window to breath new life into painting and yes that involved plagiarism. I tell you what, Punk photography that's what we need.